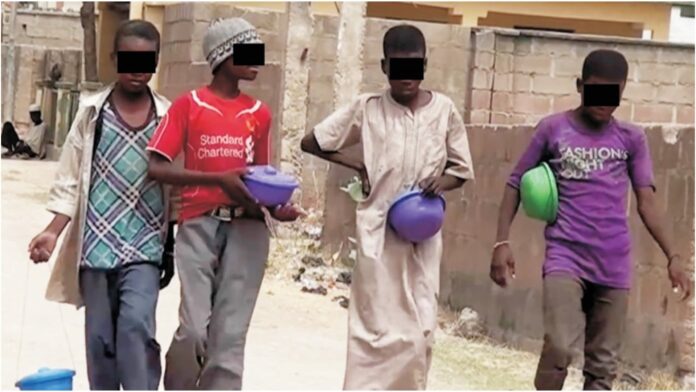 Kano state governor, Abdullahi Kaduje has lamented that the state has been infiltrated by Islamic students called Almanjiris from neighbouring countries.

According to him, most of the “Almajiri” roaming our streets are from Niger, Chad and the northern part of Cameroun.

Most Quranic education school pupils, popularly referred to as “Almajiri”, who roam the streets in the northern part of the country, are not Nigerians, Kano State Governor, Umar Ganduje, said on Monday.

“A lot of them are foreigners from Niger Republic, Chad and Cameroon,” Mr Ganduje said while declaring open, a 3-day retreat organised by the Universal Basic Education Commission (UBEC) in Kano.

The theme of the retreat is, “Enhancing Basic Education in Nigeria towards a Robust Institutional Strengthening and Effective Stakeholder Engagement”.

“From the survey, we have conducted, most of the “Almajiri” roaming our streets are from Niger, Chad and the northern part of Cameroon.

“Once you improve the quality of ‘Almajiri’ education system, you are inviting other ‘Almajiri’ from other places to come to your state. That is another problem.

“The northern governors are putting more pressure toward having a universal legislation that will limit the migration from one state to another,” he said.

Earlier, the Executive Secretary, UBEC, Hamid Bobboye, said the retreat was aimed at providing an opportunity for the board and management to brainstorm, exchange ideas and strategies toward moving basic education forward.

“This retreat could not have come at a better time than now when Nigeria and, indeed, the entire world, is facing a common enemy – COVID-19.

Nollywood actor, friend land in remand over defilement of minor