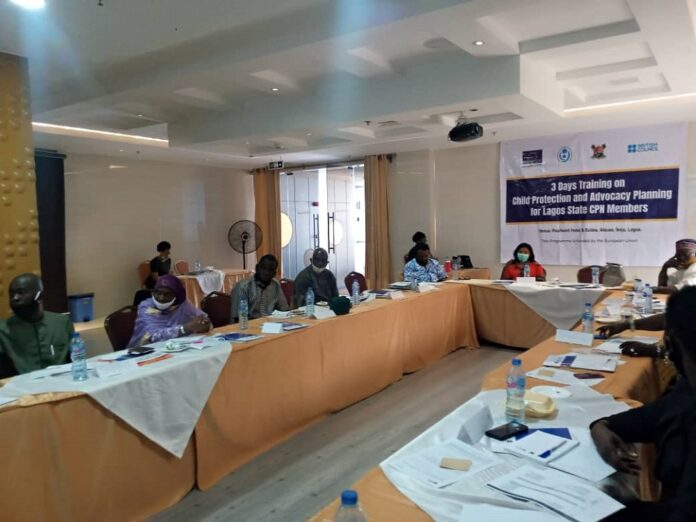 The training held at Pearlwort Hotel and Suites, Ikeja, according to Ajibola Ijimakinwa, State Programme Co-ordinator, Rule of Law and Anti Corruption (RoLAC), focused on improving access to justice for women, children and persons with disabilities through, among others, the adoption/implementation of the Child Rights Act/Law in target locations. Also improved civil society engagement in the criminal justice reform agenda and access to justice for women, children, and persons with disabilities.
Ijimakinwa said violence against children (VAC) violates a child’s human rights and has long and short-term health and social consequences as pointed out in the result of the VAC survey, 2014 carried out in Nigeria by National Population Commission which showed that “before the age of 18, 6 out of 10 children experience some forms of abuse and most children do not report nor seek for help or service because they don’t know who to report or where to receive service.

She noted that In Lagos, before now services were limited and the few who provide services were not doing it correctly, while structures were not in place and or not known to the children and their caregivers. She said UNICEF after a survey selected Lagos as one of the pilot states because of the high rate of cases of abuse reported and to help strengthen the child protection system so that structures will be put in place for the wellbeing of children in terms of prevention and response to violence, abuse neglect and exploitation of children.
Ijimakinwa said the training which was organized in 3 batches with about 60 persons in attendance, was to support the capacity of the Child Protection Network in Lagos, to engage in results-focused advocacy planning and implementation, adding that it was also for them to be able to act as drivers, influencers and collaborators with the government for the implementation of the Child’s Rights Law of Lagos State.
Barrister Taiwo Akinlami, a Social Development Lawyer and Child Advocate Expert who facilitated one of the sessions, said Nigeria is not anti-children but has to be deliberate about putting systems in place to ensure children are protected, saying there is no nation on earth where the responsibility of raising children is only on the shoulder of the parents.
He charged the participants to be committed when nobody is watching them in their course of protecting the child and also take the advocacy plan they have learned to their community and translate it into action.

Appreciating RoLAC for training her members, Lagos State CPN Co-ordinator. Mrs Ngozi Okoro said the training will go a long way to make members function well in the issue of rescue and prevention as the work of CPN is all about prevention and responding to cases of abuse. She added that Child Protection Network is a key network in Nigeria not only in Lagos State that needs such empowerment regularly to keep them abreast in their work in safeguarding and protecting children against violence.

Okoro encourages everyone to join hands to end violence against children and also charge parents to be vigilant, know who they leave their children with, have free communication with the children no matter how hectic the day has been for them and ensure that their children are empowered with prevention tips against child abuse.