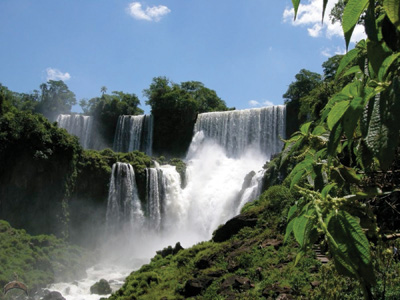 The highest waterfalls in the world is Angel Falls in the remote rain forests of Venezuela. It is about 20 times taller than Niagara Falls can not be compared with the beautiful falls we have in different locations in Nigeria.

The water drops a distance of 3,212feet. This because thick forests surrounds it.

Angel falls was not discovered until the early 1930s, when the first airplane survey of Venezuela took place. The Waterfall  was named after American explorer, James Angel, who crash-landed his plane near it soon after its discovery.

Waterfalls are a pure work of nature. The sight of a waterfall evokes emotions. Waterfalls are in Nigeria and they are really beautiful.

Erin-Ijesha waterfall is also known as Olumirin waterfall – meaning “another deity”. This natural waterfall is located in Erin-Ijesha town of Osun State in southwest Nigeria. The waterfall is along the Efon Ridge along the Ilesha-Akure expressway, and within the community axis of Erin-Oke, Erin-Ijesha, and Erinmo. The spectacular thing about this waterfall is that it is an assemblage of seven distinct waterfalls falling alongside one another from the top cliffs of the rock, cascading down into a pool of river that runs into canopies of lush vegetations. 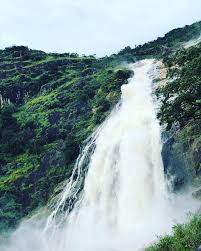 Farin Ruwa waterfall is located at the boundary of Bokkos LGA in Plateau State and Wamba LGA of Nassarawa State of Nigeria. Farin ruwa means “white waters” in Hausa language and this represents the crystal clarity of the water cascades from which some table-water companies bottle for marketing. The waterfall flows from a 150-metre high cliff and presents a fascinating grandeur of natural beauty that enchants all visitors to this area. The volcanic rocks and granite terrain of the area makes it ideal for climbing and research among other social purposes.

The Gurara waterfall is located nearly 3 kilometres off Minna-Suleja road and about 30 minutes drive from Abuja, the nation’s capital. The waterfall has a width of about 200 metres and cascades down a decline of 30 metres during the rainy season, but the intensity of the waterfall reduces during the dry season when all rainfalls have ceased. It is thought that the waterfall is an offshoot of the Gurara river which is a tributary of the popular River Niger. The waterfall is ideal for bird-watching, social picnics, photo and video sessions, and academic researches. 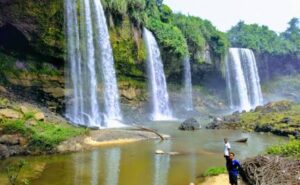 The Awhum waterfall is located along the Enugu-9th Mile expressway and about 30 minutes drive from Enugu State in eastern Nigeria. The waterfall is protected by a nearby Catholic Monastery so that people do not spoil it or damage its tourism potentials. The waterfall is fed by a continuous stream of river that streams from a large rock formation and cascades down to the delight of flora and fauna. This is one place to visit in Enugu for the best of tourism and social delights. 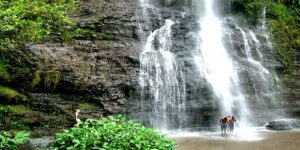 The Owu waterfall is located in Ifelodun LGA of Kwara State of Nigeria and one of the most fascinating waterfall to visit in southwest Nigeria. This waterfall is noted to cascade about 330 feet onto a rocky outcrop of hills and lush vegetations that fascinate tourists. The cascading pool of water is ice-cold and a delight to bathe in, while it will make a very good photo session for artistes and other interested individuals. 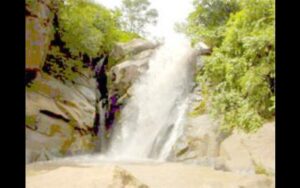 Assop waterfall is located in Plateau State and about 64 km from Jos, the state capital. The waterfall is along Jos-Abuja road and one of the best natural attractions for tourists and fun-lovers in north-central Nigeria. Assop waterfall is ideal for picnicking, swimming, bird-watching, sight-seeing and other social functions during festive periods. 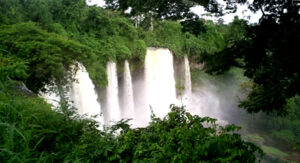 Agbokim waterfall is located nearly 315 km from Calabar in Cross-River State of Nigeria. It is about 17km from Ikom, the nearest village in Etung LGA and very close to the Nigerian-Cameroon border. The captivating and alluring serenity of the waterfall makes it a first choice among tourists from neighbouring states, and many tourists have been lucky to catch a rainbow across the aura of the waterfall at definite times of the year. 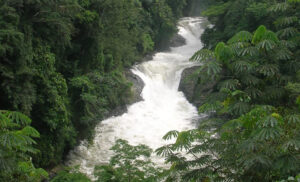 Kwa waterfall is located in the Cross River National Park and the waterfall derives its source from the Kwa River not too far from Calabar, the state’s capital. The tropical location of the waterfall amidst its rainforest and vegetative park makes it a delight to tourists to explore any time of the year, and you stand to enjoy the foaming waterfall if you happen to visit during the rainy season when most rivers fill to overflowing. 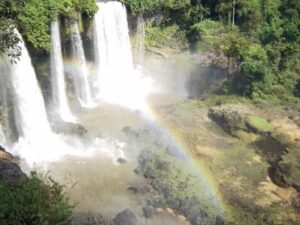 The Obudu waterfall is not as big or large as the other waterfalls in Nigeria, but yet it presents a fascinating sight to tourists to the Obudu Mountain close to the Obudu Cattle Ranch resort in eastern Nigeria. Being a natural resort, wild animals such as gorillas, monkeys, and rare birds visit the waterfall for a drink; and this makes it the more fascinating to tourists who like to have photo sessions during picnics around the area. 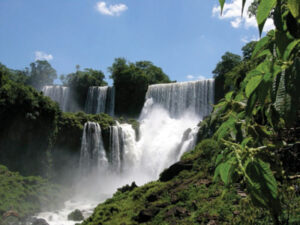 Matsirga waterfall is located in Kafanchan in Kaduna State of northern Nigeria. The waterfall derives its source from the springs of water above Kagoro hills and it cascades off the cliffs to about 25 metres below to a pool that flows off into the surrounding hills. The waterfall is a combination of four different waterfalls streaming down in a picturesque fashion that continues to fascinate all tourists to the site.