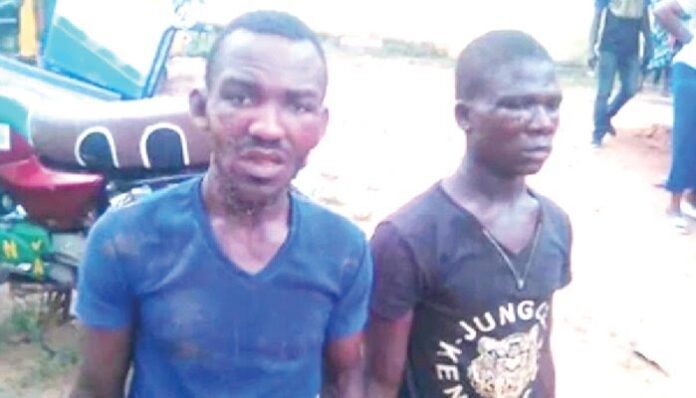 Killers of seven-year-old Kazeem Rafiu, Pastor Erinmole Adetokunbo, and his bricklayer accomplice, Adedoyin Oyekanmi have been to death.

Justice Oluwatoyin Taiwo of a Special Offences Court sitting in Ikeja, sentenced the duo to death after they pleaded guilty to the two-count charge brought against them by the state government.

The convicts were arraigned on October 30, 2017, on a two-count murder charge.

According to the charge sheet, Oyekanmi and Adetokunbo, on June 7, 2017, at number 6, Oke Oniburokun Street, Odokekere, Ikorodu, did conspire to murder one Kazeem Rafiu.

The prosecution had alleged that the suspected killers beheaded Rafiu and buried the head around the church’s altar, while the body was kept in a canal.

Adetokunbo, who was apprehended by residents, confessed to the crime and named Oyekanmi as his accomplice.

The duo led a team of policemen to the church, where the remains of the victim were recovered.

The suspected killers were re-arraigned on September 21, 2021 but pleaded not guilty to the charge.

Consequently, they were remanded in prison custody for four years.

During their trial, the prosecution called a witness and tendered some exhibits to prove the allegations against the convicts.

However, when the case was called yesterday, The state’s counsel, Mrs. O. A. Bajulaiye and defendants’ counsel, Ms. Anthonia Otsokwa informed the court that defendants have decided to change their plea.

The judge, therefore, ordered that their plea be taken afresh and it was read to them in Yoruba language, they pleaded guilty to the two-count charge.

Bajulaiye, thereafter reviewed the facts of the case and urged the court to convict them accordingly.

But, the defence counsel, Otsokwa, pleaded for mercy in her allocutus.

She told the court that the convicts have realised their offence and are remorseful for the loss of the child.

“We plead with the court to consider years sentences for the convicts,” she pleaded.

In her judgment, Justice Taiwo said the case was a very pathetic one as the defendants conspired and killed a child by cutting off his head for ritual purposes.

“These defendants have committed a heinous crime and deserve no mercy. They have cruelly and intentionally killed a seven-year-old boy, thus depriving him and his family of his bright destiny.

“Section 222 of the Criminal Law of Lagos State had imposed death penalty for premeditated murder and I have no hesitation in imposing the said punishment”.

Father sentenced to life imprisonment for defiling his 4 years old...