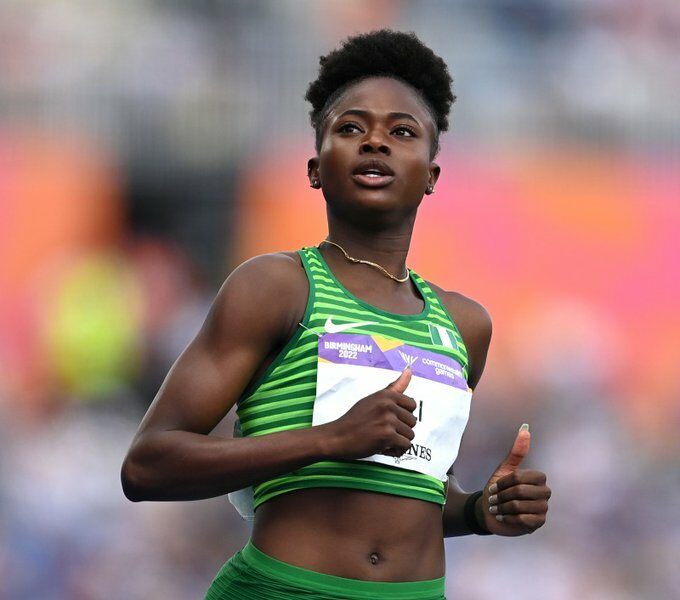 At the Commonwealth Games, CWGXX11, Favour Ofili became the third Nigerian woman after Mary Onyali (1994) and Blessing Okagbare (2014) to run in the 200m final after the 19-year-old won her semifinal heat on Friday evening at the Alexander Stadium in Birmingham.

Ofili ran 22.66 seconds to win the race and qualify for Saturday’s final where she will now be hoping to keep to the tradition of making it to the podium after her predecessors.

In 1994 in Victoria, Canada, Onyali ran 22.35 seconds but was denied the chance of completing a sprint double by Australia’s Cathy Freeman who also denied Fatimah Yusuf the opportunity at the same edition to successfully defend the 400m title she won four years earlier in Auckland, New Zealand.

Onyali had to settle for the silver medal but 20 years later, Okagbare was unstoppable as she became the first Nigerian African woman to secure the double sprint title at the Games

With the 100m decided and Ofili not a part of it, the 200m is her only hope of securing an individual title at the Games but she will have to overcome such high hurdles as the reigning double Olympic sprint champion, Jamaica’s Elaine Thompson-Herah who ran 22.63 seconds to win her semifinal heat and Namibian, Christine Mboma, silver medalist at the delayed 2020 Olympics who ran 22.93 seconds to win the second semifinal heat.

Gambia’s Gina Bass will be the third African in the final after securing one of the two non-automatic tickets on offer.