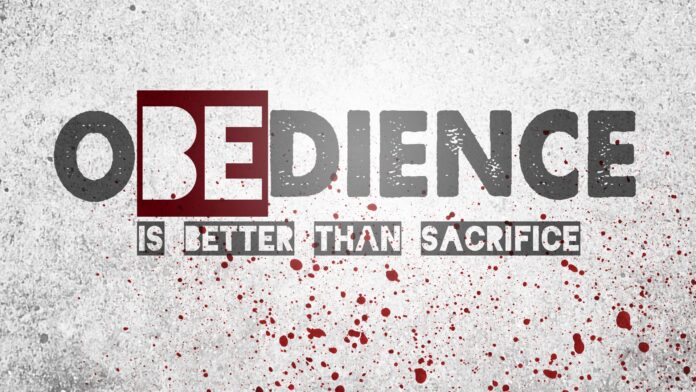 Obedience is better than sacrifice. It is the mother of success. I call obedience a virtue that anyone who aspires to be successful in life must have. Obedience is also the first test to pass in the ladder of success.

Every great person out there has first learned how to obey, whom to obey, and when to obey. Anyone that finds joy in disobeying, is never found at the top position in life no matter the academic achievement.

A popular quote attests to it that, the ship that will not obey the helm will have to obey the rocks. In the Bible, 1 Samuel 15 verse 22, says, “Has the LORD as great delight in burnt offerings and sacrifices, As in obeying the voice of the LORD? Behold, to obey is better than sacrifice, And to heed than the fat of rams”. This means obedience is better than self-effort applied to mend result of disobedience.

The #EndSARS protest going on in the country is no doubt a good course but when it has been hijacked by hoodlums, the best thing for every good citizens to retreat. A soldier will always retreat to have another chance to fight again.

Every parent should rise to the responsibility of cautioning their wards to come back home so as to be able to fight again. They have spoken and their voices have been heard. Never again will Nigeria remain the same.

Obedience is better than the sacrifice of current killings.

The Lamb and the Wolf

Once there was a naughty Lamb. His mother loved him so much that she always worried about his safety. His mother warned him, “be careful! You must not go into the forest because wild animals live there. They may threaten or even eat you”. But the mischievous Lamb never listened to the advice of his mother. Every day, the Lamb would casually walk into the forest and play there for a long time till it turned dark in the evening.

One day, as usual, the Lamb wandered far off into the forest. There he saw a spring. “I am thirsty. Let me drink some water”. He thought and he went to drink from the spring. While the Lamb was drinking, a wolf watched from behind a tree. “A Lamb! My lucky day!” The wolf thought, as he approached the Lamb. The Lamb was not aware of Wolf and there was no other animals around to save him from the Wolf.

“You know this forest belongs only to wild animals like me. Why have you come in here to take water from this spring?” asked the Wolf.

The Lamb knew that Wolves are dangerous animals. “Mother has warned me about Wolves. I am sure this fellow wants to eat me for his lunch. This fellow is ferocious. I must escape from this animal,” He thought.

The Wolf continued. “You are also dirtying the water. How will I drink this polluted water now?”

“But the spring flows from where you are standing down to where I am standing, Sir! Said the Lamb, in a meek voice. The Wolf was surprised to hear such an intelligent answer from the Lamb. But the Wolf was just looking for an excuse to kill the Lamb. “How dare you argue with me? I think you are the same Lamb who has abused me last year,” The Wolf shouted. 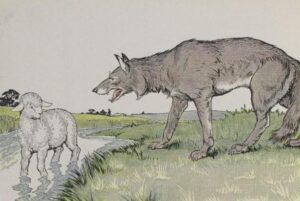 “Last year? But sir, I was not even born then!” The Lamb squeaked. The Lamb feared that the Wolf was looking after a pretext to kill the Lamb. The Lamb became cautious of its words and gestures. This way, the two of them talked cautiously to one another.

The Lamb heard some woodcutters. They were coming the way in which the Lamb and the Wolf were standing, “ If I can keep talking to this Wolf for a little while longer, the woodcutters will be here. They will chase him away”. Thought the clever Lamb. So, he said, “Mr. Wolf, you are right. I have dirtied the water, but I did not mean to upset you.”

This way, the Lamb kept on talking for a few more minutes. As the Lamb spoke, the woodcutters arrived. They saw both the Lamb and the Wolf and as they immediately drew their cutlass to attack the Wolf, he ran into the bush.

The Lamb was relieved to be safe. He ran back to his mother. He narrated what had happened in the forest and how the woodcutters saved his life. He then promised his mother never to wander into the forest again.

Every child should enjoy a childhood devoid of harmful practices… Lagos...