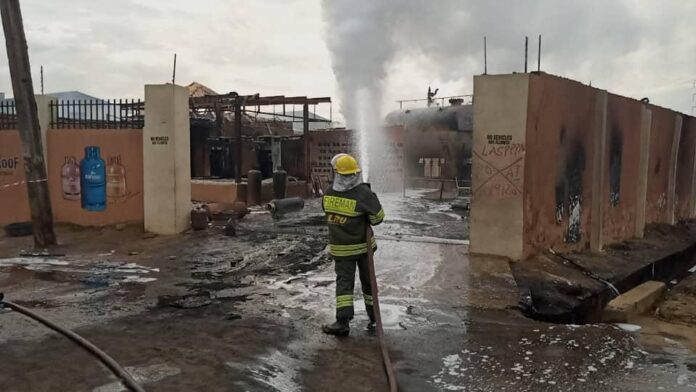 Two children sustained a serious injury while five adults died in a  gas explosion that occurred at Baruwa, Lagos on Thursday.

It was gathered that the disaster occurred after which fire from a generator led to an explosion of a gas station within the area.

Sources that spoke with our correspondent said more than 15 houses, 16 shops and a Primary School were also affected by the fire.

A resident, Wale, confirmed that “five people have died in the fire, and several houses have been burnt down. The fire could not be stopped by the resident. We have to run for our lives.”

Another resident, Tope Kazeem, said “Several people have died in the incident with properties burnt. Already, A combined effort of the Agency’s Tiger team, Dolphin team, LRU Fire, LASG Fire Service, NPF, NUPENG, and LNSC are on ground to curtail the spread of the fire to other buildings.

The Director-General of the Lagos State Emergency Management Agency(LASEMA), Dr Olufemi Oke-Osanyintolu, the incident occurred around 6:00 am, destroying several properties.

A member of the team who prefers anonymity said “On arrival at the scene of the incident, it was observed that there was a gas explosion at the aforementioned location.

“Further investigation at the scene revealed that the gas station belonging to Best Roof Cooking Gas exploded by burning buildings around. The cause of the explosion could not be ascertained at the moment.

The Lagos State Police Public Relation Officer, Muyiwa Adejobi, said: “Our men are already at the scene to help in saving lives. I can’t confirm the causality now until later”.

World Breastfeeding Week: Benefits to mothers and their babies