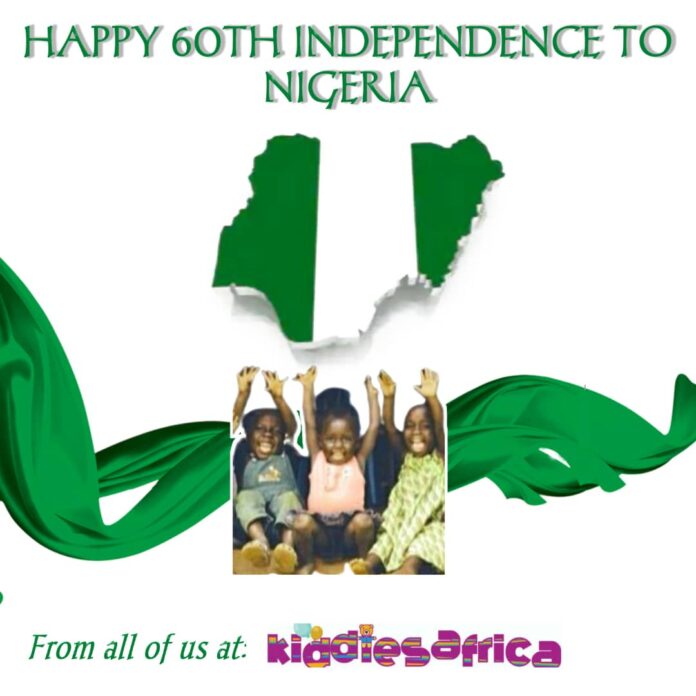 As we celebrate our great nation, Nigeria, at 60 today, there is no doubt that our leaders need to do more for children and youths who are the future of our country. Nigeria is a great nation that was popularly known as the giant of Africa  and it is still the giant because no matter how we slice it, the potentials in it can never be relegated less. Other Africa countries are coming behind in greatness. Celebrating 60 years, is a significant one to give Nigeria a new beginning which I believe it is timely to remove the veil of corruption that has characterized and portrayed Nigeria and its citizens as bad influence in the world.

The big monster, corruption now known as Nigeria trait is just a veil. It was never in our character. It was an imported monster that crept in to destroy and demean our values system as the giant of Africa.  The right has now become the wrong and wrong becomes right. It now provides fertile soil for tribalism, disregard to human values, nepotism, fraud, dishonesty, selfishness, kidnapping, prostitution, human-trafficking, mal-administration and armed robbery, disregard to rules of law, oppression of all sorts.

As we entered into maturity, corruption veil can easily be removed through religious values which produce people with dignity because it was not in our identity as a nation. Religious values will help Nigeria citizenry to champion their governance ideas and their activities intelligibly and spiritually.

Knowing our foundation should open the eyes of our leaders to begin to right the wrong that has malnourished the now and future generations for 60 years. A child born and malnourished for 60 years signifies a great problem if strategic positive move is not taking immediately.

The late Nelson Madela, former president of South Africa, said in one of his quotes that, “there can be no keener revelation of a society’s soul than the way in which it treats its children”. Since children and youths are the hope of every nation, if they are not treated with the consciousness of sowing seeds for the future, putting their interest as number one, the result goes beyond the family. It affects every area of the economy.

Nigeria has the second highest burden of stunted children in the world, with a national prevalence rate of 32 percent of children under five. An estimated 2 million children in Nigeria suffer from severe acute malnutrition (SAM), but only two out of every 10 children affected is currently reached with treatment.

Over 10.6 million people— out of a total of 13 million, or four in five people — will need some form of humanitarian assistance in 2020. – The UN Resident and Humanitarian Coordinator, Mr. Edward Kallon, raised the alarm.

Nigeria’s rapid population growth means that the number of child brides will in fact increase by more than one million by 2030 and double by 2050. Still the Child Rights Act has not been domesticated in 12 States in Nigeria.

Over 13.2 Million children are out of school according to reports. Nigeria accounts for more than one in five out-of-school children anywhere in the world. Although primary education is officially free and compulsory, only 67 per cent of eligible children take up a place in primary school. If a child misses school for even a short time there is only a low chance, only about 25 per cent, that the child will ever return. No thanks to Covid-19 that has even increase this figure.

In a UNICEF report, each year approximately 262,000 babies die at birth, the world’s second highest national total. Infant mortality currently stands at 69 per 1,000 live births while for under-fives it rises to 128 per 1,000 live births. More than half of the under-five deaths – 64 per cent – result from malaria, pneumonia or diarrhoea. Investment in this sector has been high in recent years although the proportion of patients able to access appropriate treatment remains low.

Nigerian children are vulnerable to a wide range of abuses and harmful traditional practices. The national legal framework for child protection is the Child Rights Act 2003, but to date, only 23 of 36 states have adopted the Act. Implementation is patchy with many local authority bodies unaware of their duties under the law. A national survey in 2014 found that 6 out of 10 children reported having suffered one or more forms of violence before reaching 18 years of age, with 70 per cent of those experiencing multiple incidents of violence.

Recent research showed, nine out of 10 teenagers have access to the internet and three out of four have made friends with strangers online, there remains a very low level of digital literacy and a lack of regulatory protection. Children are now using technology to perpetrate fraud online.

The data above is few out of what affects the Nigeria child despite Nigeria maturity at 60. No doubt, Nigeria government has set up policies to right all the wrongs but if the people’s psyche is not change through ethical and moral orientation programmes, the story will still be the same and children who are the most vulnerable will continue to be at the receiving end of the failure of the leaders.

Though, it is easier to build strong children than to repair broken men, according to Frederick Douglass, anabolitionist, but if the National Orientation Agency, NOA will wake up and provide a new template capable of tilting Nigerians outlook to the things that matter in life which are self-esteem, self-awareness, self-reliance, self-supporting and self-renewal, Nigeria people will smile! Children and youths hope will be restored again!