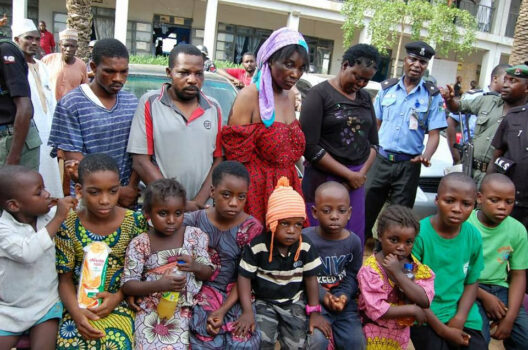 Jacob Adebayo
Police in Anambra have rescued a 15-year-old pregnant teenager with other seven children from traffickers.

The children were rescued from a five man syndicates who specialized in child trafficking across the nation.

A statement by the state police Public Relation Officer, Marina Muhammed, said the children were following an intelligent report.

” The suspects specialised in child snatching, child stealing and trafficking from different parts of the country especially South East and South-South geopolitical zones. Preliminary investigation revealed that the children (five boys and three girls) were stolen from Rivers, Bayelsa, Imo, Abia and Anambra states both at gun points and through stealing after which they were sold to the kingpin in Abia State.

“Consequently, upon interrogation, the suspects voluntarily confessed that they usually steal the children and bring to their sponsor one Mrs. Joy ‘f’ of Urata in Abia State who allegedly buys the children at the rate of between N200,000 to N400,000 depending on their age and gender.
“Further investigation also revealed that in addition to child stealing and trafficking, the same sponsor, Mrs. Joy also lure underage girls into having pregnancy after which she would buy the children from them immediately after delivery.

“So far, eight children of various age brackets were rescued from the syndicates including a year and half old baby recently snatched from the parent at gunpoint in Orlu, Imo State as well as a 15-year-old pregnant teenager. The investigation is still ongoing after which all the suspects would be brought to book.

The World Health Organisation for instance, notes that adolescent pregnancy is one of the major contributors to maternal and child mortality.

Complications arising from pregnancy and childbirth are regarded as the leading cause of death among girls 15 to 19 year old globally. Apart from its health consequences, adolescent marriage could also have socioeconomic effects on girls.

With regard to education for instance, leaving school could be the rational choice for pregnant girls, which could, in turn, deny them economic opportunities and perpetuate a cycle of poverty.